The Biology of Belief 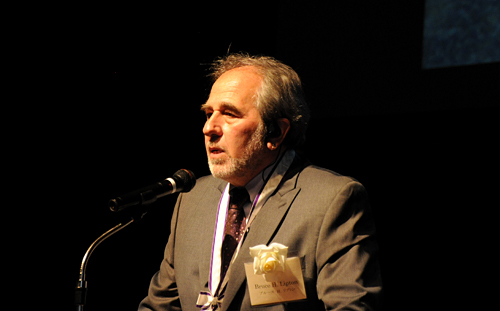 Today I would like to talk about the new biology, which I am very excited about.

In 1953, James Watson and Francis Crick discovered the structure of DNA, the molecule from which genes are made. DNA was thought to control an organism’s traits and characters, and science referred to this discovery as being the “Secret to Life.”

Today I would like to talk about the new biology, which I am very excited about.

In 1953, James Watson and Francis Crick discovered the structure of DNA, the molecule from which genes are made. DNA was thought to control an organism’s traits and characters, and science referred to this discovery as being the “Secret to Life.”

In 1958, Francis Crick created a hypothesis called “The Central Dogma.” The idea was that the heredity information in DNA genes was translated into RNA, a disposable copy of the gene. The RNA molecule was used as a blueprint to make the building blocks of the body called proteins, and our physical and behavioral characteristics were based on the protein molecules that make up our bodies.

The important point here is that information only goes in one direction. The DNA shapes the body and its behavior, but the experiences of the body cannot send information back to the DNA. In other words, this hypothesis states that genes control our lives and we cannot control or influence our genes.

The cover of this LIFE magazine asks “Were you born that way?” The main story is the belief that genes control our physical and behavioral traits. It is thought that at birth, the genes in the fertilized egg determine the characteristics of our lives. If cancer, obesity, or heart conditions run in the family, we may expect to suffer from these diseases as well, since the traits were thought to be controlled by the genes passed down by the parents. This concept in biology is called “genetic determinism.”

Since we cannot influence our genes, and since we did not pick our genes as far as we know, and we cannot change our genes, we are “victims” of our heredity. The unfortunate part about being a victim is that we become irresponsible because we feel there is nothing we can do about our lives. We also then look for someone to rescue us from these bad genes that we might have received.

Since it is thought that genes “control” life and almost all of the cell’s genes are in the cytoplasmic structure called the “nucleus,” this organelle (nucleus) is referred to as the “brain” of the cell. If you remove the brain from an organism, the organism dies. However, if you remove the nucleus, a process called “enucleation,” the cell does not die. It keeps on living with the same functions for two or more months, even though it has no genes in it. The conclusion is straightforward: the nucleus is not the brain of the cell.

Then what is the role of the nucleus? My research identified that the genes in the nucleus are simply blueprints to manufacture the protein molecule building blocks. Actually, the nucleus is the cell’s “gonads,” for it is the organelle responsible for reproducing the cells.

A gene is simply a “blueprint” with a pattern to make a specific protein building block. There is no such thing as a blueprint being “on” or being “off.” The idea of a gene switching “on and off” is a false belief. Genes are not self-actualizing. Since genes do not regulate their own activity, they cannot control anything. Genes DO NOT control life!

I was provided further understanding about how life works through my research on stem cells. Many think stem cells are something new in biology, but in fact, I was cloning stem cells in the lab over 40 years ago.

Everyone has stem cells throughout their bodies; otherwise they would not be alive.

Everyday, through normal age, we lose billions of our cells. If we did not replace these cells we would very quickly become dysfunctional and die. Stem cells in your body are like a population of embryonic cells that have not matured, and they can replace any type of cell needed by the system.

I would remove some of these cells and put them in a new tissue culture dish that contained a different growth medium, the culture fluid that represented the cell’s environment. The culture medium to the cell is the same as air, water, food, environment and climate are to people. In this particular environment the cells formed muscle.

In a second culture dish I added my stem cells but used a different growth medium made with different chemistry. In this environment, the stem cells formed bone.

In a third dish, I added the same stem cells but I used another variation of the growth medium. In this environment, the cells formed fat cells.

So how exactly does the signal control the cell’s behavior? I found out that there are “switches” on the cell’s surface membrane. There are over a 50,000 different types of switches, each responding to a different environmental signal. While these membrane “switches” control different cellular functions, they all share the same basic structure with two parts: a “receptor” and an “effector.” Just like we have receptors in our skin such as eyes, ears, nose and taste receptors, the cell reads the environment through the receptor.

When the environmental signal goes away, the membrane “switch” proteins disconnect from each other and the cellular function stops. These protein switches are like the wall switches that turn lights on and off. The process of converting environmental signals into cell behavior is called “Signal Transduction.” Signals received at the cell surface are transmitted in a cascade from one protein to another. These information pathways map how different cell functions such as digestion, respiration, excretion, nerve activity and cell mobility are activated and controlled.

If the proteins that are needed to make an appropriate response to the environmental signals are not available in the cytoplasm, the signal cascade will enter the nucleus to select and activate the gene blueprints that encode the necessary proteins. When the proteins are assembled, they then provide for the behavior needed by the cell.

The study of how environmental signals activate and regulate gene behaviors is called “Epigenetics”—a new science which I presaged 40 years ago. In the old science, which most of us have learned, we recognized “Genetic Control,” which simply means “control by genes.” The new science is radical because the prefix “Epi” means “above” and “Epigenetic Control” means “control ABOVE the genes.” The cell’s response to the environment controls the genes!

Environmental signals not only select which gene blueprints are to be “read,” but can also modify the readout of the blueprint. Epigenetic variations can lead to the creation of over 30,000 different versions of proteins from a single gene. You can create healthy proteins or mutant proteins from the same gene.

For example, today we know that most cancers are not caused by bad genes. It is the way we responded to the environment that altered the readout of the gene to create a mutant product which causes cancer. On the other hand, it also explains something called “spontaneous remission.” That is when some people who are terminally ill change their belief about life, they change their genetics and all of a sudden are remarkably and magically healed.

If you take a tissue culture dish and move it from a good environment to a bad environment, the cells will express behaviors and functions that will make them sick and they will die. To bring them back to health, you do not give them drugs. You simply return the culture to a healthy environment and the cells will recover and flourish.

Then what controls the composition of your blood, and therefore the fate of your cells? In summary, the signals from the environment such as light, sound, smell, touch are received by the brain as perceptions. The perceptions are interpreted by the mind. In response to the mind’s interpretation, the brain releases chemistry into the blood that controls cell behavior and genetic activity. So if you change your belief and perception, you can change the chemistry of your blood and create your own biology. You are a cell biologist, or more accurately, a “self-biologist” when it comes to controlling the environment of your cells.

When your mind is in a state of love, your brain releases hormones such as oxytocin (the love hormone), serotonin which causes the body to be calm and supports maintenance of the body’s tissues and organs, and growth hormone which regenerates the body’s structures. In contrast, when your mind is in fear, the brain releases a completely different set of hormones into the blood and profoundly changes the fate of the cells and the body. The stress hormone, cortisol, shuts down growth and invests the body’s energy into protection, it also shuts off the immune system to conserve energy for fight and flight. Stress also causes the release of both norepeinephrine that suppresses body maintenance and histamine, which engages defense mechanisms. Your mind is the chemist. The words you say in your mind release the chemistry.

In Japan there is a long history of kotodama. Kotodama is the spiritual character of the words, and it turns out this is a scientific reality. Japanese people also say that illness is caused by the mind. This too now has a scientific basis. You can control the fate of your cells with your beliefs and your perceptions. You are very powerful people, and you only have to understand the nature of the mind.

How do we acquire the programs in the subconscious mind? Some data is provided by genetics and those programs are called instincts. The rest comes from observing and recording life’s experiences. To facilitate the downloading of behaviors and appropriate responses to the world, Nature designed the brain of a child to operate in low EEG frequencies (delta and theta) for the first six years of a child’s life. These brain frequencies are also known as the hypnagogic trance state. The EEG frequency of calm consciousness (alpha) arises around age 6. The more intense or focused consciousness (beta) becomes a predominant brain activity around twelve years of age.

For the first six years of its life, a child is unconsciously downloading other people’s behaviors and programming them as their own. Also during this hypnotic period, a child acquires beliefs about themselves that they hear from their parents. Who am I? Am I lovable? Do I deserve things? Am I capable? These assessments are directly recorded into the subconscious mind as the child’s self-identity.

We are all very powerful beings and have an opportunity to create a life filled with health, happiness and love. You cannot change your genes, but you can change your programs. Knowledge is power. Knowledge of self is self-empowerment. We can rewrite our programs and take power over life. We can bring peace and harmony into our own lives and into the world. We can create heaven on Earth.